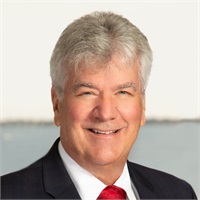 Dennis Laughlin began his career in the financial industry in 1983. He discovered this was more than a livelihood; it’s a true calling for him. That’s why more than three decades later, he’s still serving some of those same clients he’s had for years. Many of his client relationships have become deep friendships, and the day-to-day interaction and relationships he’s built with each of them are his favorite part of the job.

Prior to attending Penn State, Dennis served his country in the U.S. Marine Corps from 1969 to 1972. He is originally from Philipsburg, New Jersey and now resides in Melbourne, Florida where Three Bridges Planning is located.

Outside the office Dennis is an active member of Calvary Chapel of Melbourne, where he volunteers and serves on the Finance Committee. He has also been teaching a class on Biblical finances for many years. You could consider him the patriarch of the financial practice, as he now has the distinct honor of working alongside his son Brian every day.

When asked what makes him excited about life he says, “My love of god, my wife, my children and grandchildren is the passion that fuels my enthusiasm for my work.” Dennis and his wife, Debi, have seven children and six grandchildren.